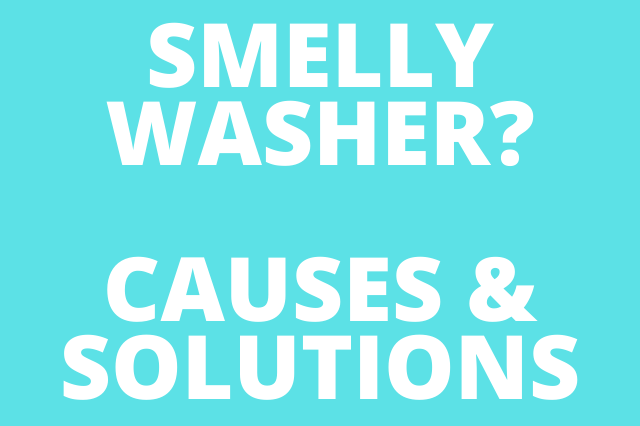 When you’re washing a load of clothes, there’s nothing worse than opening the machine after the cycle has finished to smell a wet, musty odor. Just like with your dishwasher and garbage disposal, there are several ways to get rid of the nasty smell.

In this article, we will tell you how to get rid of smelly washing machines and also tell you what causes that stink in the first place.

Cause of Washing Machine Smell and Solutions

One of the most common complaints about washing machines is a musty or moldy smell. We’ve all opened the door to our washing machine at one time or another and been hit by a very unpleasant stale odor.

It’s usually caused by excessive moisture and a build-up of bacteria. The bacteria thrive in the warm, damp conditions inside your washing machine.

Washing machines create the perfect environment for mold and bacteria growth, with warm, moist conditions inside the drum. Front-loading machines are especially prone to this problem.

Detergent residue can build up inside your soap dispenser drawer, which can lead to mold build-up as well as lingering odors.

To fix this issue, simply remove the drawer and soak it in warm soapy water for 30 minutes.

Use a toothbrush or cotton swab to remove any residue and dirt from the crevices.

Then, return the drawer to your washing machine and run a hot-water cycle without clothing or detergent to clean out any remaining residue from the tub itself.

If your washing machine door seal is dirty, you may notice bad smells coming from it. You can clean your door seal by wiping it down regularly with a cloth and some warm water. If you do this on a regular basis, your door seal will remain clean and free from mold and mildew, which can cause bad odors.

Wipe down the seal using a mixture of one part vinegar and four parts water after each load. This will help prevent any mildew growth between uses.

Debris and mildew in the washing machine filter

Old water in the trap

If you are not using your washing machine very often then it’s likely that there will be old water lying dormant in your system. If this is left for too long it can start to breed bacteria which will leak into your wash causing a musty odor.

We recommend running your machine on an empty load every couple of weeks to ensure that no bacteria builds up in any part of the washer.

Using too much detergent

This can cause mold and mildew to grow in the drum itself, or leave a residue of suds that becomes damp and smelly. Too much detergent can also cause suds to overflow from the drum onto the door seal, where they become damp and smelly as well.

This is a particular problem for front-loading machines, which tend to use less water than top-loaders, so don’t rinse out all the soap as well.

A poor drainage system is one of the key causes of mold in washing machines. This is because it prevents water from flowing out of the appliance effectively, which means there will be a pool of water left once a wash cycle has ended.

This can lead to odors and may even cause damage over time. You should check your drainage system regularly for any issues that might cause problems with draining and get these addressed as soon as possible.

During the wash cycle, your machine will heat up to a certain degree, depending on what setting you have used. If there is any moisture left after spinning, this heat combined with moisture will create an environment for mold to grow.

Not only is a smelly washing machine unpleasant, but the odors can transfer to your clothes. The first thing to do if you notice a bad odor coming from your machine is to clean it. While there are many ways to do this, the following method is safe for all types of washers, including HE (high-efficiency) models: