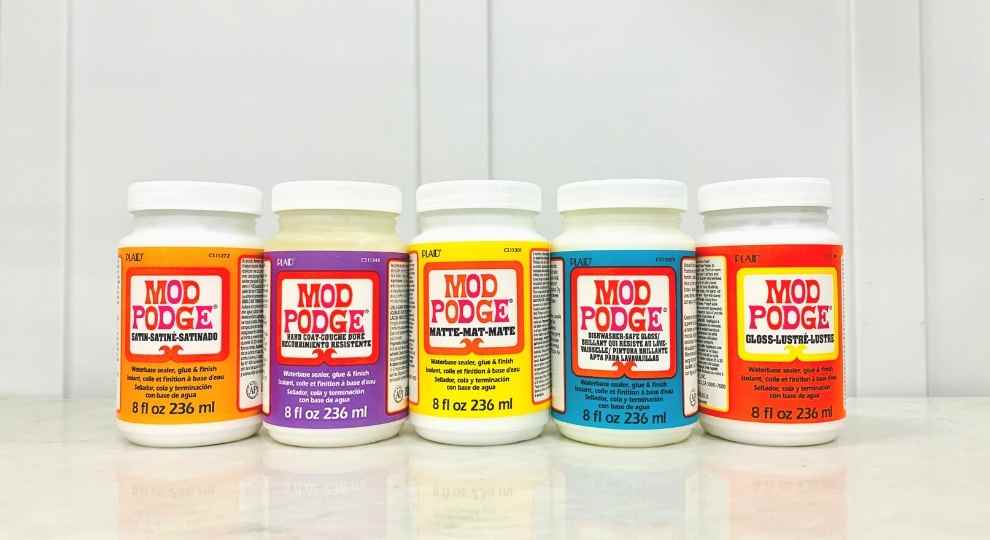 Mod Podge is a glue, sealer, and finish in one. It’s great for sealing paper, fabric, and even plastic. Mod Podge dries clear and can be used over any surface.

Mod Podge is water-based, so it won’t yellow or crack with age. It’s also odorless, non-toxic, and cleans up with soap and water.

In this article, we will answer questions about whether mod podge dries clear or not, how long it takes to dry, what causes mod podge to not dry clear, and many other related questions.

What Is Mod Podge?

Mod Podge is an acrylic-based adhesive and sealer that dries clear and flexible, making it useful for all sorts of projects in your home or classroom.

You can use it to glue paper items like photos or wrapping paper onto your walls; as a sealer on painted surfaces; and even as a glue for decoupage projects like picture frames or lamp shades.

Mod Podge is a type of glue that dries clear, but it does have a milky appearance in the bottle. When you apply it properly, however, the finish will be completely clear.

Mod Podge dries to a glossy finish, which makes it ideal for creating faux finishes on wood and other surfaces. It’s also perfect for adding a protective coating to items such as jewelry and picture frames.

The key to using Mod Podge is to apply an even coat and let the product dry completely before adding another layer. If you don’t allow it to dry completely between layers, your project may end up looking cloudy or mottled instead of clear.

A good way to ensure that your project dries clear is by painting several thin coats rather than one thick one. This way you can make sure each coat is fully dry before applying the next one.

Why Is My Mod Podge Not Drying Clear?

If your Mode podge is not drying clear, is are some of the possible causes.

Live in a freezing or humid climate

Fahrenheit or where humidity is over 50 percent, place the object in front of a fan or heater for about 20 minutes after each coat of Podge dries. This will help it dry faster so it doesn’t damage your paper when you remove it from the backing paper.

Applied the Podge too thickly

If you apply too much Mod Podge, it won’t dry clear because there’s too much glue on top of the paper or fabric underneath. You should only use small amounts of Mod Podge at a time so that it goes on thin enough to dry clear once it’s fully dried (which will happen within 24 hours).

Sometimes bottles of glue become contaminated with bacteria or mold spores, which can make them less effective at creating strong bonds between surfaces.

If you apply multiple coats of Mod Podge without allowing each layer to fully dry before applying another coat, then you’ll end up with an opaque finish rather than a clear one. This happens because each coat of the second layer acts as a barrier between the previous coat and air or moisture (which causes drying).

To fix this problem, make sure that each layer completely dries before applying another layer of Mod Podge over it.

How Long Does It Take for Mod Podge to Dry Clear

Mod Podge dries clear in about 24 hours, but it takes longer to fully cure. After the first 24 hours, you can feel confident in handling the project without leaving fingerprints or smudges. However, it takes another 3 – 4 weeks for the Mod Podge to fully cure and become strong enough to hold up to everyday wear and tear.

A thin layer of Mod Podge dries almost instantly when it’s applied to a smooth, flat surface such as glass or metal. A thin layer consists of less than one millimeter (mm) thickness, which is about four drops of Mod Podge spread over an area roughly the size of a quarter.

Can You Speed Up Mod Podge Drying?

Mod Podge dries very fast on its own, but you can help it along. It will dry faster if the temperature is cooler and the humidity is low.

You can also use a hair dryer to speed up the drying process. Be careful not to use too much heat, though, or you’ll scorch the Mod Podge.

A faster way to dry Mod Podge is to apply another coat over the first one when it’s partially dried. This will give you a thicker layer of Mod Podge that adheres better than two thin coats would.

How to Fix Cloudy Mod Podge

Unfortunately, sometimes the sealant layer of the Mod Podge gets cloudy. The reason for this is that the surface has been too dry when you applied it or there was not enough Mod Podge on your project.

To fix this problem, you need to moisten your project with water or another liquid. Once it’s moistened, you can then apply another layer of Mod Podge on top of the first layer and wait for it to dry completely before using it again.

Yes, Glitter can be used with Mod Podge to make glitter paintings or other similar projects. Just add another layer of Mod Podge over the glitter once it has dried to seal it so that it stays in place.

Yes, Plastic can be sealed with layers of Mod Podge just like paper or canvas. The only caveat is that you should test an inconspicuous area first to make sure that your plastic doesn’t react negatively with any chemicals in the adhesive solution (this could happen if you used an inkjet printout for example). If there are no problems then you’re good to go.

Glass is too hard for Mod Podge to adhere to, it will chip off very quickly if you try this method.

Mod Podge is a water-based glue that dries clear and glossy, making it perfect for all sorts of craft projects. It works best on porous surfaces like paper, fabric, cardboard, and wood.

It’s often used as a sealant to protect items like lampshades or vases. The brand also makes Mod Podge Hard Coat, which is an acrylic finish that protects your work permanently.

Yes, Mod Podge is a paint sealer that dries clear. It can be used to seal acrylic paint onto paper or canvas.

Mod Podge is a craft glue that dries clear. It can be used to seal the paper with acrylic paint, or even glue other materials to paper (such as buttons, beads, etc.).

Yes, Mod Podge is a wood finish that dries clear. It can be used to seal the wood with acrylic paint, or even glue other materials to the wood (such as buttons, beads, etc.).